...do you beat yourself up?

Weird question, I know. I ask because I find I beat myself up a lot. And it's never a fair fight. Whenever I screw something up, which is quite often, I tend to take it to heart and question all of my abilities. What's wrong with me? How could I make that mistake? Why didn't I do this or that differently? Is everything I've done since also wrong in some way?


It's miserable and counterproductive, and yet I can't stop sometimes. I hate beating myself up, yet I often feel like I need to be beat up a little bit, to take my lumps because just picking myself up, dusting myself off and walking away from a mistake with my head held high seems so…arrogant. Shouldn’t we suffer at least a little humility when we make a mistake?

I have to admit I envy people who can let mistakes roll off them like water. They don't sweat it, they don't fret, they don't feel bad for a moment. They don't waste any time beating themselves up, no mental black eyes or bloody noses for them. They just move on – sometimes to the next mistake, but at least they're moving.

Meanwhile, I'm the one in the ring with the gloves on trying to knock myself out.

When you make a mistake, large or small, do you beat yourself up or let it roll off you and move on?
Posted by Two Voices Publishing at 3:10 PM 3 comments:

The play's the thing

I was in CVS on Saturday and just happened to peruse the small selection of books they have – mostly out of curiosity, since I tend to buy my books from mail order distributors where the prices are better.

One title caught my eye right away. I was drawn to the dark, spooky looking cover and it took me a minute to realize why the image didn't quite make sense to me.

The title was Eat, Prey, Love. But this was not the blockbuster book/movie by Elizabeth Gilbert which I had just finished reading, btw. This book was the new paranormal Avon release by Kerrelyn Sparks. I read the blurb and decided against buying the book [the word 'orphans' put me off], but I had to give props to the author who will certainly get a lot of attention for her book by choosing a play on words that will have fans of Eat, Pray, Love [and there are millions of them] looking twice.

I've had a bit of a sideways relationship with the clever play on words title. One of my earliest books, Bonfire of the Vampires [not currently available] was a play on Bonfire of the Vanities. And I'm still looking for a home for my paranormal romance Interview with a Gargoyle. I'm not an Ann Rice fan but hey, the title works.

I wonder if using a play on words really does boost sales of books like Julie Kenner's The Givenchy Code or Demons Are Forever.

What do you think? Do you find a play on words title to be clever or lazy? Do you think it generates interest in the author's work or just confusion?
Posted by Two Voices Publishing at 9:29 AM 1 comment:

There's a ghost on my deck

In keeping with the spirit [LOL] of the season, I took this spooky picture of the ghost that inhabits my back deck. 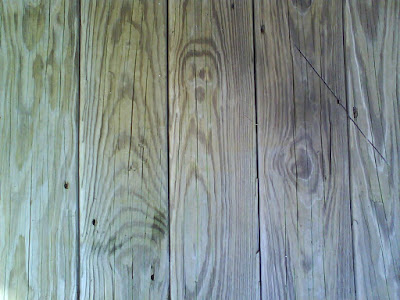 He's nervous because in a few days he's going to be polyurathaned {sp?}.
Posted by Two Voices Publishing at 5:55 PM 2 comments:

Nothing special was happening at 10:13 AM on 10/13. I was at my office - and my boss and I had just come across a rather glaring error having to do with the distribution of meeting minutes. He gave me the wrong ones to distribute. I distributed them. Everybody voted on them thinking they were the right minutes. The only reason we found out they were the wrong ones was that someone noticed a typo which turned out actually not to be a typo when we tracked it down, but that led to the discovery that we had the wrong pages to begin with.

Either way, not the finest hour of the day. The right minutes got found, copied and distributed and will be voted on appropriately - so I wonder, was 10:13 on 10/13 telling me it's all good, even when it's slightly screwed up? Or is it just a time of day, a day out of the year like any other?

Exercise your right to vote!

Not into politics? That's okay. You can go over to Whipped Cream Reviews and vote for Slither for Book of the Week! 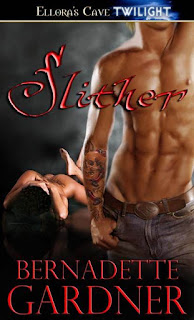 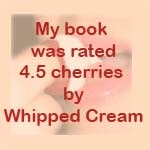 Read the 4.5 Cherry Review HERE!
Posted by Two Voices Publishing at 11:04 AM No comments:

Laugh of the Day

Watching Smallville tonight where Michael Shanks, Stargate SG-1's resident archeologist Daniel Jackson, is guest starring as...well, as Hawkman, who also happens to be an archeologist and is excavating a newly discovered tomb of Iciss.