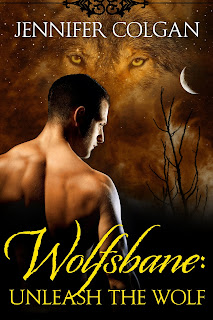 Contains previously published Wolfsbane novellas: ASPECT OF THE WOLF and
LEADER OF THE PACK.

By the light of the full moon, passion transforms into something wicked.

What do you do when your brother is a werewolf and the only person who can help cure him just happens to be the witch you tried to run out of town?

Daniel Garrison discovers a little aspect of the wolf is all it takes to ignite a wild passion with Emilie Swanson, proprietress of the magick shop he battled to have closed down. Emilie agrees to help Daniel, but she doesn’t bargain for the full moon setting off a wicked transformation that turns their attraction into something wild.

In a battle between the hunter and the hunted, who will emerge as Leader of the Pack?

Torn between a werewolf and the man who vows to destroy him, hereditary witch Charlotte Swanson is faced with a deadly choice. Vance Garrison’s werewolf blood was a curse he hid for years. Now cured of lycanthropy and still reeling from his broken engagement to an Alpha female who sought to exploit his secret heritage, his resolve to avoid emotional attachments is sorely tested when he finds himself fighting for the affection of the beautiful witch who makes him long for position as Leader of the Pack. 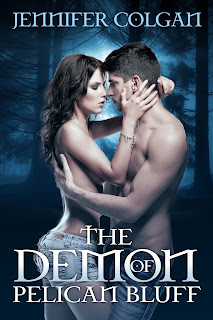 5 Angels! A Recommended Read! Jennifer Colgan deftly weaves a red hot love story with shape-shifting, paranormal suspense, and a twist that will keep you breathing heavy ... This is one of the best reads I’ve had all year. Prepared to be glued to your chair, unwilling to stop until the final page is turned. – Lee Ann, Fallen Angel Reviews

Something is on the prowl in Pelican Bluff, Minnesota. When the mayor calls in cryptozoologist Laurel Jensen to investigate strange sightings of a winged, demon-like beast roaming the forest, she can’t resist. It’s not her passion for the unknown that draws her, though, but her need to come face to face with the creature that’s been haunting her dreams.

He calls to her, eager to lure her into his clutches and claim her for his own. Certainly not a run-of-the-mill cryptid, more than a clever hoax, the beast is real, and it’s searching for the perfect mate.

National Forest Service Ranger Cade Morrison draws the thankless task of escorting Laurel on her search for evidence of the beast’s existence. Cade knows the mayor is looking for publicity to attract tourists to the Bluff, and he doesn’t want any part of it. But he does want Laurel, and he’s not willing to share her with the Demon of Pelican Bluff. 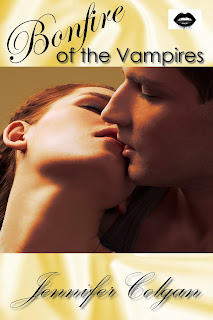 I could not put this one down. The author captures your attention from page one and doesn't let go! [BONFIRE OF THE VAMPIRES is] a great Vamp read! – Teri, Enchanted in Romance

Now, three years later, she’s saving his life again, this time from a hired assassin. Herself. Abby is a vampire killer and Jake is her latest assignment.

The bonds of love and friendship that have held Jake and Abby together for three years are stretched to the limit when Abby learns the only way to save the man she loves is to give her heart, her soul and her very life blood for him. Together they learn there’s no way to avoid getting burned in the Bonfire of the Vampires. 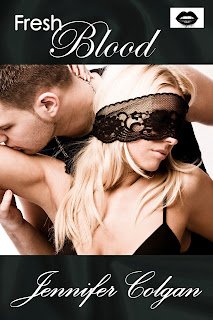 A desperate call from her missing sister sends Erica Talbot on a dangerous rescue mission. Determined to prevent her twin from becoming a feeder, Erica steps out of her quiet, lonely existence and into a dark underworld where vampires make the rules.

Maxwell Hart is a vampire investigator. Part of his job is to protect humans. The moment he lays eyes on Erica, he knows she doesn’t belong in his world, but that doesn’t stop him from wanting her there.

With Max as her guide, Erica descends into a world where humans willingly give up control to their vampire masters. Posing as Max’s submissive feeder, Erica discovers a strange freedom in relinquishing her hard won self-control to Max.

After just one taste of Erica’s blood, Max finds he hungers for no one else. How can he possess her when drawing her deeper into his dark world will change her forever? 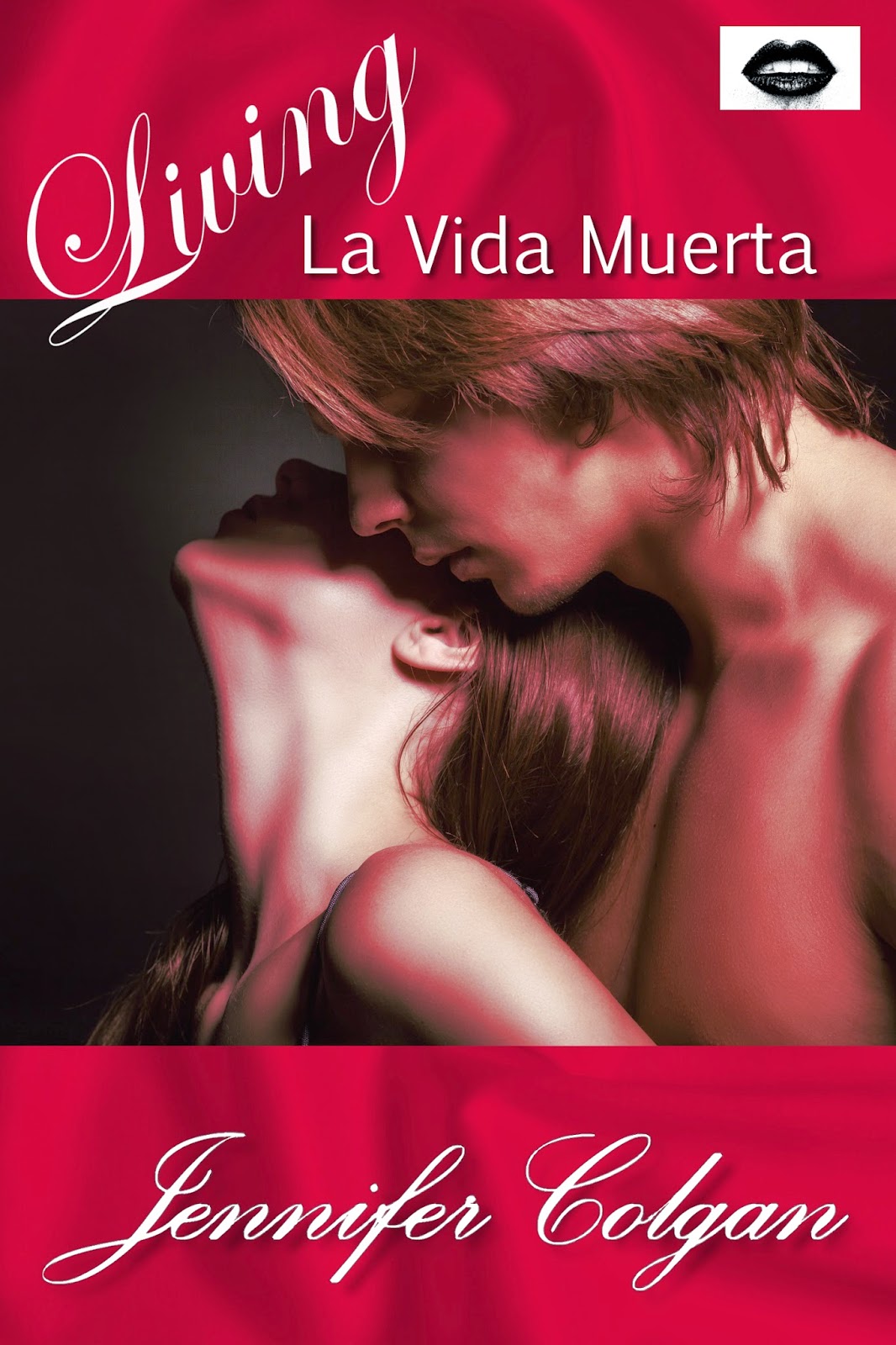 I suggest you wear something on your hands so you don’t get burned, because La Vida Muerta is steamy hot. - Cherokee, Coffee Time Romance


Elena Talbot betrayed her sister for a chance at immortality. Now, ensconced in the dark world of Chicago’s undead, she clings to the person who helped her find herself and her sanity after the gut-wrenching, soul-stealing transformation from human to vampire.

Vampire investigator Lucas Vitale has gotten used to having Elena in his home and in his bed. She’s always ready for his lusty games, but she’s still afloat in a sea of self-doubt and confusion about her new existence. She wants the one thing he can’t give her, a purpose.

When Elena’s quest for fulfillment brings her too close to Lucas’s long-hidden secret, he casts her out. Only after she’s gone does he realize there’s no point in living “the dead life” without her... 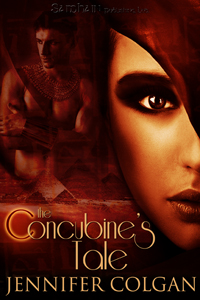 ...the flavor and detail Ms. Colgan uses to lure us into the dance of attraction that is seemingly as new as ever and as old as time is flawless. Ms. Colgan deserves her every angel – Catrina, Fallen Angel Reviews

When an ancient papyrus scroll comes up for auction, gallery curator Cait Lang draws the distasteful task of notifying her boss’s favorite client, Grant Pierson. The rare art and antiquities collector’s arrogance grates on her nerves, but most of all she resents her own weakness for his athletic body and deep brown eyes.

It’s the hieroglyphic scroll that draws Grant to a private, after-hours showing at the gallery. But the lovely Cait’s narration of the erotically charged story captures his interest. Determined to hear the rest of the tale—and spend more time in Cait’s company—he convinces her to join him for dinner.

The intricate, sensual tale transports Cait’s and Grant’s imaginations into the past. And the depictions of sexually charged temple rituals inspire them to explore their own hidden passions—in Grant’s apartment.

Even as Grant succumbs to Cait’s charms, the drive to own the scroll hums in the back of his mind. If he isn’t careful, though, he’ll not only lose the chance to hear the end of the story, he’ll lose something more precious. The missing piece of his own life—Cait.

Soon to be re-released 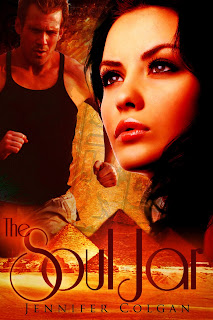 THE SOUL JAR: ONE SHOT! Ms. Colgan's characters charm and beguile their way into your heart even as they're taking on the mob, the FBI, and an Ancient Egyptian curse. A heartstopping, heartwrenching good read. – Literay Sass, Literary Sass Reviews


A romance three thousand years in the making.

When Bree Sennett breaks into Ming Xao Chen’s Curiosity Shop to recover the fabled Soul Jar of Ammonptah, the last thing she expects to find among the tacky souvenirs is a ghost. But there he is, Mason “Chance” MacKenzie, back from the dead and stirring a confusing mix of joy at seeing him alive…and betrayal for leaving her.

Two years ago, Chance faked his own death to save both their lives. It’s taken him that long to convince himself she’s better off without him, that she’ll never forgive him much less love him. Yet as their mutual search for the Soul Jar brings them face to face, he realizes the only one he was fooling was himself.

Now the woman who stole his heart is about to steal the Soul Jar, but a life he promised to protect hangs in the balance. There’s only one way to satisfy both their clients. Make a deal. And hope he can trust her to help him complete his mission before he loses her forever.


Soon to be re-released 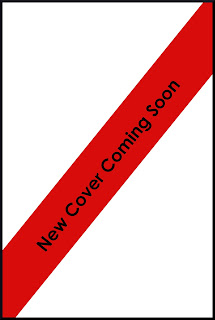 
This is a most entertaining brief excursion into paranormal action/romance drama. Strange New World, I feel, is the perfect nibble-sized read... - Mrs. Giggles

Love can bloom where nothing else survives…

Wildlife photographer Chase Calder is no stranger to wandering in wilderness areas like the stark Nevada desert. When a freak electrical storm leaves him strangely disoriented, and he awakens as a prisoner in a high-security Air Force base under the scrutiny of a seductive microbiologist, he knows he’s in dangerous territory.

Undercover Special Ops agent Martina Sanchez finally has the proof she needs to expose the Acheron beam for the danger it is. Not a harmless bio-decontaminate, but a potentially deadly super-weapon. She’s also discovered exposure to the beam has more than one unexpected side effect for Chase whose sizzling touch melts her cool, professional resolve.

Martina risks everything to free Chase before he becomes the next casualty of unauthorized scientific testing. Together they flee to safety, but safe becomes a relative term when their growing passion finally ignites… 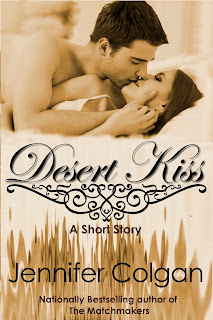 Five Ribbons! ..... definitely a story you’ll want to read – more than once...Put this one on your To Be Read list this summer. - Nickie Langdon, Romance Junkies

Is their passion real, or only a mirage?

On a lonely stretch of I-95 in the middle of the Nevada desert, journalist Savanna Blaine and photographer Ben Lantano find themselves stranded by engine trouble on their way back from an assignment. Their quest for a gas station leads them to La Mirage, a beautiful resort nestled in a secluded canyon where they are the only guests.

Invited to spend the night in lush accommodations, passion flares between Savanna and Ben who have suppressed their hidden desires long enough. A single touch ignites an unforgettable night in each other’s arms, but the next day, when La Mirage mysteriously disappears, they’re left to wonder, is their newfound intimacy real or nothing more than a trick of the summer heat? 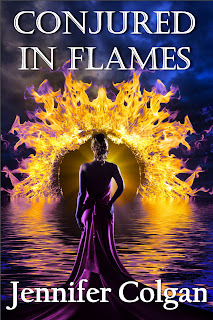 5 Angels for CONJURED IN FLAMES! … a fantastic journey … Jennifer Colgan does a phenomenal job of world building with a wonderful twist near the end. – Serena, Fallen Angel Reviews


Swept into another world by the desperate spell of an evil sorceress, real estate agent Gillian Lawrence figures she must be dreaming. Her dream becomes a nightmare when she realizes her resemblance to the sorceress has embroiled her in the ambitious plans of the handsome Lord Rodan to save his people from an army of ruthless barbarians. Rodan demands that Gillian use her magick and join his cause, or spend the rest of her life as his prisoner and even possibly face death. But with no powers of magick at her disposal, what's a transported real estate agent from present-day America to do? A deadly battle hinges on her ability to convince two armies that her magick can stop an invasion and save the Southern Kingdom...as well as winning the heart of the man she loves...