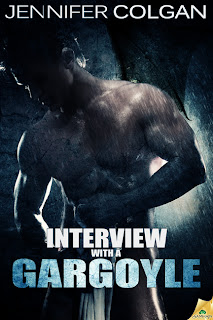 I'm thrilled to announce my full length paranormal romance, INTERVIEW WITH A GARGOYLE, is now available in Print!

The Long and the Short Reviews had this to say about it:

Interview with a Gargoyle is a super amazing story with fascinating characters and a love between two kindred souls. The details were superb, the editing squeaky clean, and the dialogue brisk, entertaining and insightful to the characters. There is nothing I didn't like about this book. It's surprisingly fresh, innovative and just plain fun.


“Run! Get out of here while you can.” Palmer’s strangled command stopped Melodie halfway around the front display counter. She skidded to a halt and glanced back over her shoulder. DeWitt had Palmer by the stretchy collar of his T-shirt and was lifting his linebacker body about a foot off the floor.

Ignoring Palmer’s gasping and his ineffectual kicks, DeWitt turned his predatory gaze on Mel. “I only want the jewel. Don’t make me hurt him to prove how desperate I am.”

And there went her escape plan. In a strange way, Palmer had saved her life, and weird as he was, she couldn’t let him suffer on her account. “Jewel? You’re looking for a jewel?” Why hadn’t he just said so in the first place?

“The Cabochon is a cursed jewel. It will bring you nothing but tragedy. Hand it over to me, and you’ll escape its curse.”

“Ah, okay. I think I know what you’re talking about. The Gogmar gave me something in the alley, right before he…died.”

Tortured eyes searched hers, and she had the distinct impression he could see into her soul. The oddly naked feeling made her shiver.

“It gave you the Cabochon?”

“It gave me a sapphire. Now, put Palmer down gently, and I’ll give it to you if you promise to leave us alone, okay?”

She made a “down boy” gesture with both hands.

“If you give me the Cabochon, I promise, you’ll never see me again.”

That seemed reasonable to Mel, but apparently not to Palmer, who still dangled in midair.
“Don’t do it, Melodie. He’s pure evil. He’ll kill us both if we give him what he wants.”

“Oh, please.” DeWitt dropped Palmer then, totally ignoring the “gently” part of Mel’s request. “Get over yourself, demon hunter. There’s nothing pure about me.”

Clutching his chest, from which DeWitt had likely ripped a handful of hair, Palmer slithered away along the floor. With a lot more bravado than she felt, Mel inched back into the kitchen and put herself between DeWitt and Marty, who still sat grinning like a fool on the very edge of the center workstation.

“Okay. Nice and easy,” she said, holding up her hands like this was an old-fashioned stickup. Since it appeared the only weapon DeWitt possessed was Palmer’s sword, she probably could have made a break for it, but she really was more than willing to part with whatever it was Creature Boy had given her.

“It’s in my pocket.” She reached slowly for the gem that the Gogmar had pressed into her hand. DeWitt’s tawny gaze followed her movements, skeptical but anxious.

Judging by his expression, Mel held all the power. He wanted the cursed jewel just as badly as she wanted to get rid of it. When her cold fingers scraped the crumb-dusted bottom seam of her apron pocket, her heart shriveled a little. With a reassuring smile for DeWitt, she felt to the left, then to the right. Nothing.

She held open her pocket and glanced inside. There was nothing there but a few shards of antler and a little ball of bright green lint. “Um…”

DeWitt’s accusatory glare made her spine tingle. “You lied to me, lass.” The timbre of his voice brought to mind the windswept hillsides of Scotland and the icy depths of a cold hell. He was not amused.

“I did have it. I swear. It must have fallen out of my pocket in the alley. It’s probably still out there under the…ooze.”

DeWitt wasn’t buying it. His ire wilted her. Under his alluring golden gaze, she felt guilty.
“I swear, I don’t have it.”

“Yes, you do.” The accusation hung in the sweet-scented air of the kitchen for a second; then DeWitt lunged for her.

[Find out what happens next...AMAZON.COM]


Posted by Two Voices Publishing at 1:00 AM 2 comments: