To celebrate the re-release of my erotic-romance novella MORE THAN A FANTASY, my short story KEN'JA will be FREE at Amazon.com from today through Saturday August 11th. 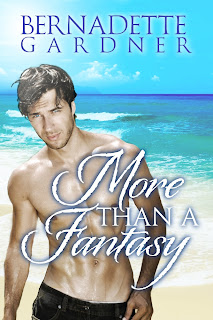 Forced into exile on a private Aegean island, Mara Zander longs for freedom. Prince Tiran of Atlantis has watched the red haired beauty from afar for weeks. When he breaks the centuries old law that forbids contact with humans, he discovers he’ll have to compete with his brother, Poseidon, to win Mara’s heart and set her free.

Five Angels! More Than a Fantasy is a wonderful short story with an imaginative plot, a delightful heroine, and two very intoxicating males. Bernadette Gardner has created a unique story centered around the desire to have your fantasy come true and what a wonderful experience it can be when it does. – Shayley, Fallen Angel Reviews

When two prisoners of war find themselves unexpectedly freed from their captivity they discover they have no choice but to rely on each other to survive. Tige D’Vron, a Thalian Warrior, and Zira Teynor, a human intelligence courier, set out together across a nameless planet to avoid recapture by their enemies, the reptilian Ketomir.

Soon, however, Tige becomes aware of a growing desire for his human compatriot, a desire he cannot control. Thalians have long battled the Ken’Ja, the biological imperative to mate or die. In an effort to protect Zira from himself, Tige forces her away from him, hoping she will flee to where he cannot find her, because when he does, he will claim her in a mating frenzy too intense for a mere human to withstand.