The last of my ‘out of print’ titles is now available! 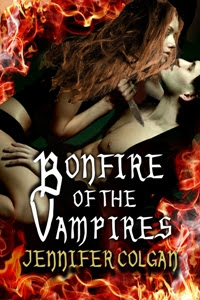 
Now, three years later, she’s saving his life again, this time from a hired assassin. Herself. Abby is a vampire killer and Jake is her latest assignment.


The bonds of love and friendship that have held Jake and Abby together for three years are stretched to the limit when Abby learns the only way to save the man she loves is to give her heart, her soul and her very life blood for him. Together they learn there’s no way to avoid getting burned in the Bonfire of the Vampires.

Posted by Two Voices Publishing at 9:29 PM No comments:

Today I'm guest blogging at Paranormal Romantics about how sometimes as great as a hero is, he may not be the right man for the job. Come comment for a chance to win a book!
Posted by Two Voices Publishing at 8:14 AM No comments:

Evacuation procedures for Hurricane Irene drove us from the shore three days early, so I'm at home again, plugged back in and watchning it pour watching the sun come out.*

To everyone in the storm's path, stay safe and dry.

Here's a picture I took at the beach, showing one of Irene's advanced scouts checking out the territory. 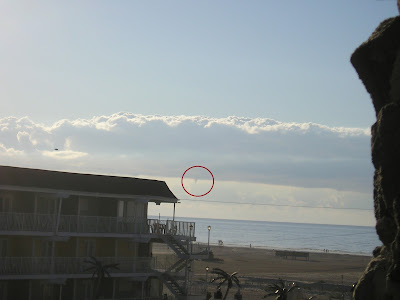 Note the tiny funnel cloud - obviously a harbinger of the doom to come.

*As of 10:30 am maybe we're in the eye of the storm, but everything looks rather benign here. I realize there were places hit hard by the storm, but once again, it seems the media has given itself something to do by going right to reporting gloom and doom rather than sticking to the facts. Sure, storms are unpredictable, but you would think the technology that allowed them to decide 65 million people would be effected by the storm, would also be able to tell them by the time it hit Northern NJ it would be little more than an average rainy day.
Posted by Two Voices Publishing at 9:23 AM No comments:

I'm on vacation this week!

After seven days of bumming around at the beach, hopefully I'll be raring to start writing again and all ready for fall.

How are you unwinding this summer?
Posted by Two Voices Publishing at 2:37 AM 3 comments:

It goes without saying [but I'll say it anyway]

I’ve been following the Publish America vs. JK Rowling train wreck this week, and I have to admit it boggles my mind that anyone would fall for the claims made by PA and plunk down money for a chance to have anyone who is not an agent or editor read their work.


Think about it – they’re saying for $49, they will ‘bring your book to the attention’ of a famous person. [Ms. Rowling isn’t the first. They’ve apparently done this with others, including the President]. Now, ask yourself, what does ‘bringing to the attention’ mean?

They could simply jot your title down on a cocktail napkin and slip it under the stall the next time she’s in a public restroom. There. Brought to her attention. They could – and I suppose this is what PA clients were thinking – arrive for lunch at her castle in Scotland with a box of books and discuss each work individually for a moment or two over tea and scones. Yeah, because JK Rowling has time for that. She also has time to read a truck load of books and comment on each one [that’s part of the deal – you write her a short note and she’ll comment back.] Think about it. Please.

What busy celebrity or public figure, whether it’s the President of the United States, a well-known actor or a successful author, really has the time or the inclination to sit down and read dozens or hundreds or, heaven forbid, thousands of books and make personal comments on each one? They have lives and jobs and families, and while I’m sure they read for pleasure, they don’t have time to give individual authors bragging rights. ‘JK Rowling read my book and liked it!’ ZOMG!

And even if they did, [which is beyond unlikely], having an author or well-known person read your book is not the path to literary success. Sure, it’s nice to know someone who might be inclined to provide you with a cover quote, but that’s about all they could do for you. If anyone thinks JK Rowling or Stephen King or any author is going to phone their agent or their publisher and even vaguely recommend you get a publishing contract, or worse, SHOW your book to their publisher, you’re sadly mistaken. This is NOT HOW IT’S DONE. It’s just not. It’s a sad cliché perpetuated by movies and television shows. The hopeful author hounding a famous writer, asking them to read their manuscript in hopes of getting it passed along to someone who can actually write them a check – is a plot device, a trope. Maybe it happened once in the history of the industry, but like the Big Bang, it’s not something you see more than once in a gazillion years.

So, though it shouldn’t need to be said, please don’t fall for anyone promising to show your work, published or unpublished, to a celebrity. It’s useless, even if, on the outside chance, they actually do it, you’ll get nothing valuable out of it. If you’re looking for literary success, send your book to a reputable agent, or the appropriate editor at a well-known publishing house, not to JK Rowling, President Obama or, heaven forbid, Publish America.

HAES and the art of surrender

I’m over at Killer Chicks today talking about knowing when it’s time to quit. Come find out what I quit doing and why.
Posted by Two Voices Publishing at 1:50 AM No comments:

Get some Fresh Blood on your Kindle! 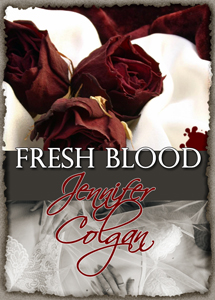 A desperate call from her missing sister sends Erica Talbot on a dangerous rescue mission. Determined to prevent her twin from becoming a feeder, Erica steps out of her quiet, lonely existence and into a dark underworld where vampires make the rules.
Maxwell Hart is a vampire investigator. Part of his job is to protect humans. The moment he lays eyes on Erica, he knows she doesn’t belong in his world, but that doesn’t stop him from wanting her there.
With Max as her guide, Erica descends into a world where humans willingly give up control to their vampire masters. Posing as Max’s submissive feeder, Erica discovers a strange freedom in relinquishing her hard won self-control to Max.
After just one taste of Erica’s blood, Max finds he hungers for no one else. How can he possess her when drawing her deeper into his dark world will change her forever?
Don't forget, if you like Fresh Blood and want follow Elena's story - pick up a copy of La Vida Muerta!

Posted by Two Voices Publishing at 2:11 PM No comments: 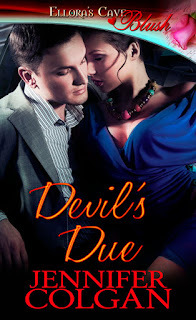 Who would you sell your soul to save?

For Ceara Landon, the answer to that question is easy. She would do anything for her younger brother Kevin, even if saving his life means shattering his dreams.

On first glance it seems the skyrocketing success of Kevin’s band, Pillars of Stone, is a dream come true, but Ceara sees the truth. His increasing drug use will destroy him and ruin any chance he has for lasting happiness.

Ceara traces the source of Kevin’s dubious rise to fame back to night club owner Alexander Quinn. The gorgeous entrepreneur hides a terrible secret. He buys souls for the Devil, and he purchased Kevin’s in exchange for fame and fortune. In desperation, Ceara offers her own soul in exchange for Kevin’s, and for the first time in his lonely existence, Alex risks everything to refuse. He agrees to help Kevin sober up and guide his band to true success, but the price for Ceara is high. She’ll have to bargain with her heart to save her brother along with the man who wants to possess her body as well as her soul.


To find out more about DEVIL’S DUE visit


Be sure to stop by Killer Chicks tomorrow to read an exclusive excerpt!
Posted by Two Voices Publishing at 4:53 PM No comments:

Have you visited Excerpt Monday?

For a sneak peek of the cover art for my August release, Devil's Due, drop by the Excerpt Monday blog today. A comment enters you to win one of two gift baskets, one of which features both a copy of Devil's Due and Seven Days in Sydney.

Stop by and say hello!
Posted by Two Voices Publishing at 9:13 AM No comments: