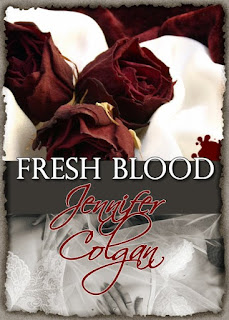 I know it's early for gift giving, but I believe the key to a stress-free holiday season is to start early!
So, on that note, I'm offering a gift to my readers.
I have re-released my 2005 vampire novel, Fresh Blood and it's now available from my website as a FREE download!
Check out this cover art! This was created for me by one of the incomparable Romance Divas! Ginny Glass [aka Word Sugar] does incredible work, and I plan to have reason to need more of her covers soon.
Please stop by my website and pick up a copy of Fresh Blood - and if you've already read the book - thank you! I haven't left you out. There will be a another free read available soon - all new and never before published, so please check back to my FREE READS often.
Happy Holidays and Happy Reading!
Posted by Two Voices Publishing at 9:05 AM 8 comments:

It's that day again! 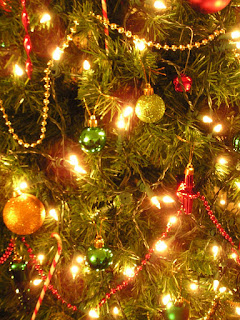 I blogged about Black Friday last year and how much you just have to love a day that most people have off for no better reason than it's the day AFTER a holiday.

You really can't beat that. Now, I realize everyone out there who works in retail probably curses this day. The sales start at 4:00 AM [seriously - what does anyone need that badly they have to go out at four in the morning to get it?], the crowds are vicious and the next day is Saturday, so people just come back and shop all over again.

I stay home and put up the tree. Today it all got done - amazingly enough. I put up the outdoor decorations, and the tree - DH cleaned the living room for me from top to bottom [will miracles never cease?] and now I'm ready to crash.

Dinner was leftovers from Turkey Day, and they were just as good the second night with a little fresh corn bread stuffing and some home made chocolate covered rice krispy treats for dessert.

I can honestly say, I'm just about ready for the holidays and marginallly stress free at the moment. So on that note: Happy Black Friday everyone! Have a great un-holiday.

Posted by Two Voices Publishing at 7:39 PM No comments:

Have a happy turkey day!


Posted by Two Voices Publishing at 10:12 AM No comments:

I must have one of these.
It's called a Smart Fortwo and it's just adorable, don't you think?
Sure, it is literally a tin can on wheels. Not much bigger than a Matchbox car, it's not made for highway driving, and it's real purpose is for city folk who will be hopping short distances to go from office to Starbucks to pick up their dry cleaning to the corner market then back to high rise apartment, but damn...
I WANT one!! I could fit four of them in my driveway. Heck, I could probably fit one in my purse.
Posted by Two Voices Publishing at 1:47 PM 3 comments:

I envy anyone who lives in an area of the country [or the world for that matter] where the weather is predictable.

One thing I tell people I like about living in northern New Jersey, is the change of seasons. However - case in point this weekend, I'm not so fond of having three out of four seasons occur all in the space of 24 hours.

Yesterday started out humid and 'tropical rainy season' wet. I discovered the depth of that wetness when I went out to go shopping and discovered my car window had been open a crack ALL NIGHT LONG.

So, after covering my damp driver's seat with a plastic bag and beach towel, DD and I set off in search of crafts.

The half-hour ride was full of rain and wind - seasonable Novemberish weather. After about 90 minutes in the craft store, we emerged to hot sun [so glad I left my sunglasses on the kitchen table at home because at that time they were utterly useless to me]. We cranked the AC in the car and headed home. Welcome back to summer.

We arrived back home to windy rain, and this morning woke to bitter cold and a threatening gun-metal gray sky that looked like it was gearing up for a blizzard.

I often wonder how nice it would be to live somewhere where the weather is static. A balmy 80 degrees for maybe 360 out of 365 days - or someplace with a rainy season, a dry season and a tropical paradise season and that's it.

Don't get me wrong, we do enjoy some beautiful days here in NJ, but they're usually interspersed between a day of blazing heat and a day of bitter cold. We've learned over time only to appreciate the kind of weather we had last month [whatever last month happened to be] - for instance in the middle of winter everyone is wishing for the dog days of summer [during which they were cursing the heat and counting the days until the crisp afternoons of autumn begin.]

The funny part is Mother Nature has our number. She doesn't want to hear us complaining so she gives us what we want - all in the same day sometimes.
Posted by Two Voices Publishing at 7:41 PM 3 comments:

And from the file of 'Things no one needs...'

Literary action figures.
There are more available at this place and various others around the web.
With all the debate lately about whether or not books are 'recession-proof' [just in case, you know, we actually have a recession one of these days] it begs the question, how do companies that manufacture stuff like this intend to stay in business?
Granted, action figures in general are big money. Kids love 'em - Ninja Turtles, Star Wars - even the collectors go crazy for the stuff [DH being case in point]. There are people who will forgo paying the electric bill in order to get their hobby fix, their books, etc, but how many people do you suppose will be saving their scarce pennies in the coming months to complete their collection of literary action figures?
Posted by Two Voices Publishing at 8:30 AM 6 comments:

A Rogue's Redemption by Jennifer Colgan
ISBN-13: 978-1-60272-417-4 (Electronic)
Sequel to A Rogue's Reward...
Fallon Robard, captain of the all-female crew of the Gabrielle, made her most difficult decision when she abandoned young lovers Rhea Galant and Lord Sheppard York on a deserted island after Sheppard’s father refused to pay the ransom for his kidnapped son. Now, months later, Sheppard’s older brothers, Jacob and Jon, have tracked down Fallon.
The handsome twins seek to avenge their brother’s suffering and demand Fallon repent her crimes. When faced with punishment at the hands of two masterful men, will Fallon get more than she bargained for, or just what she deserves?
Genres: Historical / Pirate / Action / Adventure / BDSM / Series
Heat Level: 3
Length: Extended Novella (32k words)

Check out Amber Quill Press for a sizzling excerpt!

Posted by Two Voices Publishing at 11:48 AM 2 comments:

What size do you prefer?


Get your mind out of the gutter. I'm talking about purses.


I ask because I often find myself faced with the purse dilemma. A big purse is great because you can carry everything. In addition to the essentials like wallet, keys, sunglasses and cell phone, you have room for those important emergency products every woman needs - like a novel, a can of hair spray, coupon file, manicure kit, assorted lip gloss and a small pharmacy.


The down side of the big purse is they tend to become satchels that you sling over your back like Santa on Christmas Eve. They weigh a ton and usually you can never find what you want inside, even though you KNOW it has to be in there somewhere.


Last week, I dumped my satchel purse and went for something petite and compact.


It holds my wallet [a new, smaller wallet], a miniature hair brush, my keys, cell phone, sun glasses and a pen.


You would think I could get by on that, but I'm worried. What happens when someone hands me something to carry?


For instance, DH will regularly hand me his wallet and his keys when we're out shopping - because being a man and having pockets sometimes isn't all its cracked up to be. The kids do the same thing. I become the repository for small items they buy and don't want to carry - the lip gloss, the Matchbox car. I become the holder of the four useless crayons that come with the kids menu in any restaurant. [Heaven forbid they just leave them there - it's not like we don't have 4000 crayons at home]. I become the keeper of the Nintendo DS, the library book and anything else they are too frail to schlep home from wherever they've been.


Now I can't do that. In fact, I had to perform origami just to get my paycheck in my purse on Friday. There is no extra room at all.


Maybe I should get a new big purse and just put my small purse inside it. That should solve all my problems.


So, big or small? Which way do you roll?

I don't want to know.

Seriously, you can throw rotten tomatoes at me if you want to, but I dread finding out the outcome of this election.

I know I could stir up a lot of political upheaval, and there are staunch defenders of each side, but my personal belief is, no matter who wins, we all lose.

All politicians make promises they don't keep - either they never intended to in the first place, or they discover they just can't re-align the wheels of change the way they thought they would be able to.

It's long been my belief that anyone truly qualified to run this amazingly complex country would be too humble to want the job.

My wish is that whoever is fortunate [or unfortunate as the case may be] enough to win will surprise us all and be the kind of leader he already thinks he is. I will light a small candle for hope, but I won't be holding my breath.

Good luck everyone. I do believe we're all going to need it.
Posted by Two Voices Publishing at 6:31 PM 2 comments:

...as opposed to the old grind, begins today.

I'm off to my new job - yes, yet another one, and hopefully a new way of looking at my life as a writer. It's time to re-invent myself and change my approach.

How am I going to do that?

Not sure. I think I may start by cleaning off my bulletin board.

Revisions of my gargoyle story, revision of my blurb for Strange New World [Samhain, Feb 09], plotting of my demon story, revamping [no pun intended] my website and possibly making a free read available.

All in my copious spare time.

Oh, yes, and shopping for a new washing machine since mine broke down yesterday [surprise, surprise] and in doing some research DH discovered the darn thing may be at least 20 years old. Definitely time for a new one. SIGH.
Posted by Two Voices Publishing at 6:40 AM 2 comments: