So how was Christmas?

I hope everyone got a lot of books for Christmas, but if you still need more to read, a dollar goes a long way:

Still just $0.99 at Amazon, Smashwords, BN.com and All Romance eBooks!

Merry Christmas everyone! I hope you all have a wonderful holiday.

I'll be spending the day reading - and if you will be too, hop on over to Killer Chicks and check out the list of KINDLE FREEBIES available today and tomorrow [December 25th and 26th].

The list includes EUPHORIA - and a mix of genres from some wonderful authors. Go stock up!

FREE AT AMAZON.COM December 25th and 26th!
Posted by Two Voices Publishing at 1:00 AM No comments:

I just finished building all of my pages and I've got mouse elbow.

All of my available titles [and Bernadette's] are now listed on the appropriate blog pages to the right, along with major buy links. I'll be adding more buy links when I get the chance, but with the exception of those titles that are currently available exclusively through Amazon.com, most of my titles will be available at multiple retailers.

I'll be phasing out my individual websites over the next week or so, because updating here is much easier so any searches for Jennifer Colgan or Bernadette Gardner should lead you here.

If there's anything conspicuously missing, or there's something I can add to make it easier to find my books, please go to my Contact page and let me know.
Posted by Two Voices Publishing at 8:09 PM No comments: 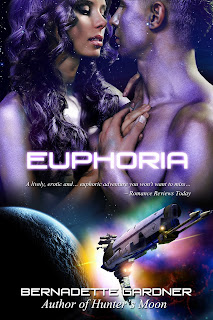 My newest release, just in time for Christmas!

[Special thanks to Niina Cord of For the Love of Reading Book Cover Design for the gorgeous cover!]

Euphoria is exclusively available through Amazon.com at a special holiday price of $2.49.

When former military commander, Tarrant Kane, meets Nola Rule at the exclusive resort on Sensuron, she offers him intense carnal pleasures and something he craves even more than sex: a challenge.

Kane’s dalliance with Nola comes with a steep price, however, and he soon realizes that falling in love is a risk he isn’t prepared to take.


Earth-Sec Agent Fletcher Gray doesn’t need or particularly want a sex slave, but he has no choice in the matter when he’s forced to decant trinium scout Talia Lory from a stasis pod full of U-4EA, the galaxy’s most powerful aphrodisiac.

In between bouts of unbridled sex, Fletch begins to realize he enjoys Talia’s company on more than a physical level, but when her sex addiction wears off, will she still want him?


These stories have been previously released.