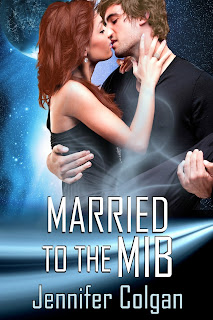 FOUR STARS! ...such a good read...romantic and funny - Riverina Romantics

Handsome, blue-eyed Spencer Ward stirs feelings in Dulcie Crandall that she can’t quite explain. Spencer feels it too, but he knows why pretty, vivacious Dulcie seems so familiar. She’s his wife.

Spence is a Man in Black, a special agent dedicated to protecting Earth from temporal and extraterrestrial threats. Three years ago, he met Dulcie, an alien abductee, during a daring rescue from an Umayan organ harvest ship. His employer, the Insterstellar Security and Time Agency, had Dulcie’s memories of their whirlwind courtship and alien wedding ceremony blocked before they returned her to Earth. Now ISTA needs the memories locked in Dulcie’s subconscious, and Spence and his half-alien shapeshifter partner, Ruben “Ruby” Throckmorton, have been assigned to retrieve them.

It should be easy, but will Spence be able to remain objective when the love of his life experiences total recall of the time she spent married to a MIB? 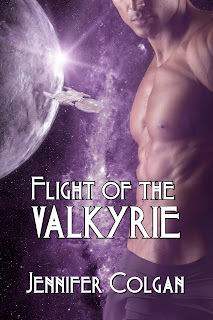 Five Hearts! FLIGHT OF THE VALKYRIE by Jennifer Colgan is a dynamic love story, taut with suspense, intrigue, betrayal and true love marked by the hottest love making imaginable. Ms. Colgan has truly outdone herself with this one. I wasn’t able to put it down. The sexual tension as well as the suspenseful tension kept me awake and reading to the end. [This is] one you’ll want to read again and again. – The Romance Studio

Arrested for the murder of thirty members of the High Council of the planet Carnelia, Sienna McCade could face a hundred years in cryogenic suspension, the maximum punishment allowable by Galactic law. Jordan Dane is the Courier assigned to transport Sienna’s cryo-stasis tube to a prison ship, where she will remain until her trial.

When his ship crashes and Jordan is injured, he finds himself at the mercy of the beautiful assassin who has managed to escape from the broken stasis tube. He knows he owes her a debt of gratitude for saving his life, but he can’t ignore his mission. Should he deny his growing feelings for her and turn her over to the authorities, or risk everything to help her prove her innocence and spare her a hundred years in cryo sleep? 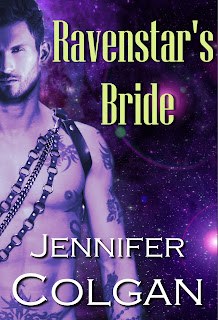 Princess Ra Nara Lumina, destined for the throne of Cadeia, has fled her privileged life to escape the dark destiny that awaits her. Slated to be bred with her cruel cousin, Cleus Antioch, she can expect most of her children to die of a genetic illness borne in the genes of the royal family. To save her unborn heirs, she leaves the palace, but as long as she remains untouched by a man, she is still eligible to rule. Pursued by the ruthless Chancellor Kossa, who will do anything to see that succession of the throne is unbroken, Ra Nara must find a man willing to claim her as his wife. Istrian Merchant Captain Ravenstar Bren finds himself with a strange dilemma. To save the princess and the lives of her as-yet-unconceived offspring, he must claim her as his bride, but can he convince the proud people of his nomadic nation to accept a "land-born" as the wife of their sovereign?