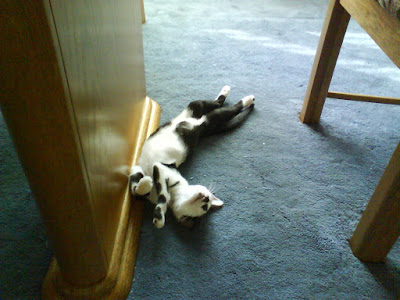 I wish I could get this comfortable under the dining room table. Or anywhere.
Posted by Two Voices Publishing at 8:20 AM 2 comments:

For a week she lives a life she’s only dreamed of and learns far more about her own burning sexuality and untamable spirit than she thought possible. But after seven days in Sydney she also discovers the consequences of giving herself over to her every wicked desire.

“She’s stunning.” Tess Ronson adjusted her thick-rimmed glasses and tilted her head as she circled the seven-foot-tall glass cylinder in the center of Gentron Inc.’s Level 4 Security lab.


The naked female form currently suspended by delicate silicon wires within the cylinder was a work of art as well as cutting-edge robotic science.


Long, copper-colored hair swirled around her pale shoulders. Dark pink areolas surrounded her distended nipples, tipping breasts that looked to be perfect D-cups. Her hips flared from a tiny waist, and her flat abs sported a tight slit of a navel. Between her slightly spread thighs sat a triangle of neatly trimmed auburn curls. Long, long legs stretched down to delicate ankles and dainty feet.


Her eyes were open, revealing light blue irises circled by a fringe of burnished lashes. Arched brows gave her a patrician appearance. Her lips were the perfect shade of pink.


Beside Tess stood Dr. Jared Simon, head of Gentron’s robotics division, hands clasped behind his back, preening. This was his triumph, and he looked about to crow.


Behind him, two other members of his top-secret research team lingered, also staring at the body in the cylinder. Melissa Stanz, PhD held a clipboard in front of her. Her dark eyes studied Tess more than the exquisite construction in the sterile tank. Next to her, Marc Roker, MD, more mechanic than physician, gaped likewise at the culmination of Simon’s last ten feverish years of work.


“She’s even more perfect than I envisioned her,” Simon announced. His eyes shimmered a bit in the fluorescent lab lighting. Pride mixed with something akin to worship made his normally stoic features seem to glow.


“Have you completed your checklist?” Melissa asked. She scribbled a few notes on her clipboard. The clinical psychiatrist disdained electronic input devices, so while everyone else employed at Gentron, Inc. walked around with iPads and BlackBerrys, Dr. Stanz carried paper notebooks and ink pens, leaving her overworked assistant the task of typing up all of her daily notes.


Tearing her gaze away from the tank, Tess nodded. “I told all my family and friends that I’m going to a symposium in Detroit for the week. I’ve recorded a couple of voicemails I can send remotely so people will think I’m calling in but missing them. I had my snail mail stopped, but I’ll be keeping up with e-mail since I’d do that anyway. Everyone I know is aware that I’ve got a coworker named Sydney staying in my apartment while I’m gone.”


“You sound excited about it, but I have to be sure you’re ready for this. You can still change your mind.” Melissa met her gaze. They’d been discussing the next phase of Dr. Simon’s experiment for months now, and if Tess had to reassure anyone one more time that she was ready to have her consciousness transferred into the beautiful body in the stasis tank, she’d scream.


This was a dream come true, not only for Jared Simon, who would get to see his most advanced android construction finally walking and talking and interacting with the world, but for Tess who, for the space of seven days, could escape her slightly plump, mousy-haired, nearsighted self and see the world through the robotic eyes of a supermodel.


“I’m one hundred percent ready for this, Dr. Stanz. This research is my life’s work too. All I can think about is how this technology will help burn victims, paraplegics, people with catastrophic injuries who’ll be able to walk around and live and work and communicate with their families while their real bodies heal. If this experiment works—”


“Not if, Tess. There’s no room for if in my work,” Dr. Simon reminded her sternly.


Chastised by his tone, she backtracked. “Of course. I meant when—”


“Once this phase of the research is concluded, we can consider the implications for life extension. No one will ever be trapped in a dying or dysfunctional body again. There will be no incurable illnesses, no irreparable injuries. Maybe even no such thing as death.”


Tess’s entire body tingled at the thought. Sydney represented the ultimate medical intervention, the answer to every disease and disorder known to man. What couldn’t be cured, one day, could simply be discarded, and an ailing person’s mind could be uploaded into a perfect, healthy, strong, disease-free biomechanical casing customized to any desired outward appearance.


The four people in this room stood on the frontier of science and technology so advanced it would transform the world the moment it was revealed to the general population. Tess felt there could be no higher honor. The mere suggestion of backing out made her ill.


Melissa glanced at Dr. Simon. “Then let’s get started.” She backed away from the tank, still making notes.


Tess’s heart rate soared. This was it. She’d dreamed of nothing else for weeks.


While Marc and Dr. Simon opened the stasis tank and began removing the suspension wires from the android body, Tess moved to one of the two diagnostic beds at the far end of the lab. A dozen different monitors and life-support devices surrounded one of the beds. Tubes and wires and electrodes hung from a metal pole along with bags of saline, antibiotics and a concoction of extraordinarily strong drugs that would keep her fragile human body alive for the next seven days while her mind resided inside the supercomputer resting within Sydney’s titanium skull.


By outward appearances, Tess would be in a medically induced coma, but on a deeper level, she’d be functionally dead, her bodily functions controlled by machines. Even coma patients, research had shown, possessed some awareness, if not of the world around them, then of a plane of existence constructed in their own subconscious. They still resided in their bodies even though those bodies were unable to respond to outside stimuli. Tess’s case would be different. Her mind would be gone, not just hiding in a little-used section of her brain.


Tests had determined the human body could only sustain itself in this state without irreparable damage for just over seven days, even with catastrophic medical intervention. So at the end of the week, Tess’s mind would be transferred back into her body...or sooner if they ran into any problems.


Eyeing the equipment around the bed, Tess unbuttoned her lab coat and shrugged out of it. She placed that and each item of her typical working uniform—black slacks, a plain white top, white socks and soft-soled sneakers—on a straight-backed chair next to the bed. She glanced around to make sure Marc and Dr. Simon were occupied before removing her bra and panties and sliding them surreptitiously beneath all of her other clothes, as though no one might suspect she actually wore underwear. She slipped on the surgical gown Melissa had provided for her and climbed into the bed to await the injections that would knock her out and begin to loosen her mind’s hold on her body.

Seven Days in Sydney is my first all-erotica title. To find out more, visit:

Amazon.com
Posted by Two Voices Publishing at 2:36 AM 1 comment:

Come visit Riverina Romantics Blog and learn all about my upcoming releases!
Posted by Two Voices Publishing at 6:57 PM No comments:

Today I unveiled my new cover art for my October Samhain release, Interview with a Gargoyle over at Killer Chicks along with some other headline news for July.

Here's the gorgeous cover... but you have to stop by Killer Chicks to find out everything else.


Posted by Two Voices Publishing at 7:32 AM No comments:

Get it while it's free!

For the month of July Smashwords is offering Married to the MIB for free!

Just enter the Coupon code SSWSF at checkout to get your copy for a whopping $0.00 - hurry while supplies last. {That's supplies of days in July, by the way}.

July 1 - July 31 - FREE at Smashwords!
Spence is a MIB, a special agent dedicated to protecting Earth from extraterrestrial threats. Three years ago, he fell in love with Dulcie, an alien abductee. Now the fate of an empire rests on Dulcie’s hidden memories of their affair. It’s Spence’s mission to retrieve them. It should be easy, but will Spence be able to remain objective when the love of his life experiences total recall?
Posted by Two Voices Publishing at 8:55 AM No comments: